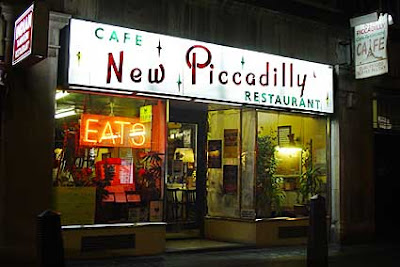 There's a sad piece in the Independent Magazine today about the imminent demolition of the classic 1950s chrome and formica cafe, the New Piccadilly in Soho (above).
The clientele of the cafe has always been eclectic: film stars, pop stars, ordinary members of the public, Hungarian dissidents, West End alcoholics, call girls such as Christine Keeler. "We've always had nutters and eccentrics. You never get them in Starbucks because one of the goddesses on Mount Olympus doesn't let them in. There is something about those places; they have had the blood drained. They have been Draculised- that's a nice word. I just made that up", says the cafe's owner Lorenzo Marioni. "Draculised" is indeed a nice word and it describes exactly what is happening to the British High Street. According to Adrian Maddox, whose website Classic Cafes celebrates the breed and mourns their passing, less than 500 of the fewer 2,000 odd cafes that fed Britain in the 1950s remain. "Very individual places run by characters like Lorenzo are an irritant in the way of turning our streets into huge faceless malls", he says.

Every time I visit London I am struck at just how globalised the place has become: I lost count of the number of Starbucks I saw on a walk through the centre of the city yesterday. The charge sheet against globalisation is a long one; but surely one of its most damaging effects is that it has turned our High Streets into bland, lifeless places. A Starbucks world is a dead world, devoid of character, individuality and charm.

"Draculised" really is an excellent word to describe what we have allowed to happen.
Posted by Neil Clark at 11:32

By Hungarian dissidents do you mean refugees from its former Stalinist dictatorship, or perhaps neo-Communists driven into exile by the evil liberalism of its present neocon running dog lackeys?

"The charge sheet against globalisation is a long one; but surely one of its most damaging effects is that it has turned our High Streets into bland, lifeless places."

What ludicrous hyperbole. Oh, boo hoo, Neil doesn't like a Starbucks on every corner.

At least you're not working 100 hours a week in a sweatshop for bugger all. Get some perspective.

Oh "chrome and formica" gets approval from Neil Clark. You will be wanting to drink Victory coffee next, a kind of standardisation you would obviously accept in the wonderful late 'forties world you mourn.