The end of the affair? 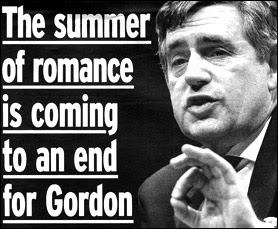 This piece of mine appears in today's Daily Express.

Is Gordon Brown's summertime romance with the British voters over?
When Brown took over as Prime Minister at the end of June, Labour received an immediate boost in the polls- so relieved were voters that, at long last, Tony Blair had departed. And in the first few weeks, it must be said that Brown did make a plausible start to his Premiership. His reaction to July's floods was better than that of Tory leader David Cameron who at the height of the crisis, flew off to Rwanda. And Brown's calm handling of the attempted terrorist attacks at Britain's airports also earned him approval.

But now, as summer draws to a close, a new opinion poll indicates that- like all good holiday romances- Brown's with the British people might be coming to an end too.

The ICM poll shows that Labour's lead over the Conservatives is down to just five percentage points. Law and order and health are the issues where the government is losing public support. A 30-point lead on the issue of law and order for Labour in 1996, (the year before they took office) has been transformed into a 10-point deficit, while on health voters think that Labour and not the Conservatives are more likely to worsen the state of the NHS.

The poll is encouraging news for David Cameron who has been under pressure from within his own party after a poor by-election result at Ealing Southall last month. But while the poll suggests that Cameron's ditching of his much-derided "hug a hoodie" approach to youth crime and its replacement with a new, tougher approach is having an impact with voters; it would be wrong to put all of Labour's falling popularity down to a Conservative mini-revival.

Although his spin doctors are keen to portray Gordon Brown as someone who would mark a clean break with the lies and subterfuge of the Blair era, the truth is that the Prime Minister is as much an architect of the discredited New Labour project as his predecessor. It was Brown, who in Labour's first term, helped cause a funding crisis in schools and the NHS by freezing government spending, before massively increasing it again later but in the wrong areas. It was Gordon Brown who championed the wasteful PFI (Private Finance Initiative) scheme, under which the taxpayer pays far more in the long run for private companies to build new schools and hospitals than they would if the government paid for the new schools and hospitals itself. It was Gordon Brown who has introduced more than 100 stealth taxes, meaning that UK taxation has increased from a 39.3% share of GDP in 1997 to 42.4% in 2006. And it was Gordon Brown, the so-called "prudent" Chancellor, who has presided over the largest and most irresponsible credit boom this country has ever seen- one that has resulted in the level of consumer debt spiralling to an incredible £1.13 trillion.

Gordon Brown's serious persona may to some be a welcome change from Tony Blair's Cheshire Cat-style insincerity, but politically there is very little difference between the two men.

Although he said he would "learn the lessons" from Iraq, Brown, like Blair, refuses to acknowledge that the war was a catastrophic mistake. Even though it is clear that the conflict is un-winnable, he dilly-dallies on announcing a date for Britain's withdrawal, putting the lives of British troops in increased danger. On the subject of the new European Constitution, Brown apes Blair too, refusing to put the issue to a referendum, despite Labour's election promises and the massive loss of national sovereignty at stake. On immigration, Brown enthusiastically subscribes to the New Labour belief that the more people in Britain the merrier, announcing plans to build a total of three million new homes by 2020, a programme which threatens to turn our green and pleasant land into a concrete jungle.
And when it comes to tackling violent crime, Brown is as inept as Blair was, offering nothing except platitudes, soundbites and headline catching gimmicks like the gun amnesty announced at the weekend.

Does this mean that an October election is now more unlikely? Ironically, the government's falling support could mean the opposite. A five percent lead would be enough to give Labour a workable majority of around fifty seats in Parliament. But a fall of just two points and the majority would be down to around ten.
At the back of Brown's mind must be the fate of another Labour Prime Minister, James Callaghan. Callaghan was widely expected to announce a general election when he appeared on television in a special Prime Ministerial broadcast in September 1978. Unemployment and inflation were both falling and Labour was ahead in the polls. But to everyone's astonishment, Callaghan announced he would be carrying on until the following year.
The rest, as they say, is history. The industrial unrest of the "Winter of Discontent" which followed not only caused Labour to lose the 1979 election, but helped keep the party out of office for the next eighteen years.

For Brown too, delay could prove equally fatal. Unions are threatening a new "winter of discontent" of strike action if the Prime Minister refuses to ditch his two per cent limit on public sector pay increases. Unemployment is rising and with a recession looming in the US, it's odds-on that the economic situation will only get worse in Britain too. And as the weeks go by, the fact that despite the change of personnel at the top, there has been no departure from the failed policies of Tony Blair, will become apparent to more and more voters. Brown's honeymoon with the British public may be over. But the way things are going, an early election might still be his best chance of avoiding a divorce.
Posted by Neil Clark at 21:39