Ronaldinho: Too sexy for Mourinho? 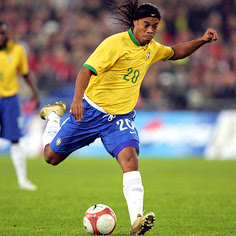 The late Danny Blanchflower (Spurs and N Ireland) had no doubts about what football was really about. "The game is about glory, it is about doing things in style and with a flourish, about going out and beating the other lot, not waiting for them to die of boredom."
It seems that Roman Abramovich, Chelsea's billionaire owner, agrees.
According to reports, Abramovich is prepared to offer the great Brazilian striker Ronaldinho (above) £200,000 a week in an attempt to lure the world's most gifted footballer away from Barcelona. The Russian believes that the toothy Ronaldinho could be the missing link in his attempt to win the Champions League and make Chelsea more entertaining.
But even if Abramovich is successful in bringing Ronaldinho to Stamford Bridge, there remains one major obstacle to his ambitions.
In three years at the club, Jose Mourinho has won two Premiership titles, two League Cups and an FA Cup, making him easily the most successful Chelsea manager of all time. But he has achieved this by playing safety-first football - a style that makes Chelsea extremely hard to beat, but fails to excite.
For all his talk of playing a more expansive game this year, Mourinho finds it hard to shed his natural caution. His first instinct when Chelsea go 1-0 up is to protect the lead: as occurred once again in Saturday's tepid single-goal victory over Portsmouth.

To thrive at Chelsea, Ronaldinho would need to be given a free role, something he is unlikely to get from Mourinho. Abramovich's ambition to create a team that does things the Blanchflower way - in style and with a flourish - is laudable. But if he really wants sexy football, he might need to look for another manager
Posted by Neil Clark at 13:57

As a Chelsea fan I just hope we get him. But I don't want Mourinho to go either! The thing is, his tactics may sometimes be over cautious but he wins trophies. It would be nice if he played more attacking but not at the expense of winning!