Kauto Star: The Best since Dessie 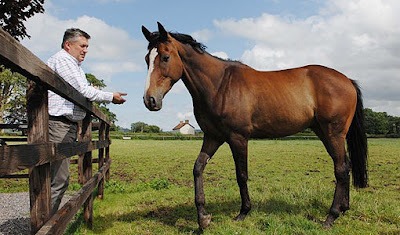 The best of times is always then but never now, so the saying goes. But in regards to National Hunt racing, this truly is a golden age. Yesterday, Kauto Star (above, with trainer Paul Nicholls), took the mickey out of a small, but select field for the King George at Kempton, winning the race even more impressively than he did twelve months ago. Kauto Star has now lost only once in his last nine races, a run of form which has seen him win two King Georges, a Cheltenham Gold Cup, a Tingle Creek and two Betfair Chases. And in most of those victories he's done it without being asked a serious question by his jockey. Quite simply, Kauto Star is the best NH performer we've seen since Desert Orchid, and already has claims to be considered one of the best steeplechasers of all time. I'd certainly place him above three-times Gold Cup winner Best Mate, for his sheer versatility and the way he travels through his races. How about you?
Posted by Neil Clark at 13:20

He was certainly impressive on Boxing Day, Neil. Poor value for Cheltenham, though. I think Denham, unlike Kauto Star, is improving and could challenge him. KS has the edge at present though. Keep an eye out for Souffleur who won at the weekend. Jumps like a stag. Excellent Blog, by the way.

Many thanks, Tony.
Souffleur is certainly very exciting.