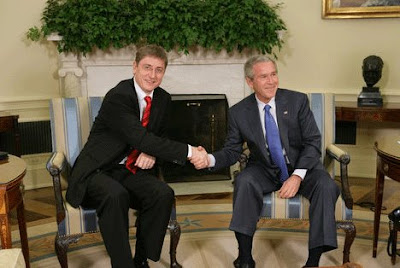 Around half of Hungary's state-owned train services were affected Monday by an open-ended strike against the Socialist-led government's intention to privatize health insurance services and lower pensions from next year, officials said.
Shorter strikes also were held at several hospitals, hundreds of schools and some regional bus services. Anti-government protesters formed one-lane roadblocks to slow traffic at about three dozen locations around the country.

I've written before on the way ordinary working people are coming together in Hungary to fight against the extremist policies of their pro-war neoliberal government. Support for the completely unsocialist Hungarian Socialist Party is now down to 13%, while their coalition allies, the fanatically Thatcherite, pro-big business SZDSZ are now on 2%.

The government of Ferenc Gyurcsany (above with his pal George W. Bush) while receiving pluadits from foreign capital and the US Embassy, has been a disaster for the Hungarian people. Let's hope it will soon be consigned to the dustbin of history.
Posted by Neil Clark at 08:20