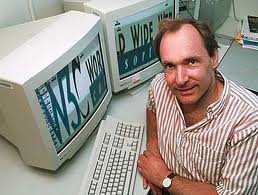 This article of mine appears in the Sunday Express.

PROFESSOR Sir Tim Berners-Lee, the scientist from south London who invented the World Wide Web is, to paraphrase Winston Churchill, a modest man with very little to be modest about. His invention has, after all, radically changed the way we live and do business.

I was lucky enough to interview this truly Great Briton and what struck me was the passion he had for keeping the internet free from government censorship and other forms of outside control.


I think it’s time we all paid close heed to Berners-Lee’s wise words.


Calls for greater regulation of the net are growing increasingly louder and debate has raged over the rights and wrongs of 75,000 users of Twitter leaking the news of footballer Ryan Giggs’s injunction, which was intended to prevent press coverage of his extramarital affair. “The web should be like paper,” Berners-Lee told me.


“A form of paper which doesn’t allow you to write sentences which are malformed, or not in English, or of right-wing or left-wing bias, would be a very poor form of paper on which to base civilisation.


The beauty about the web, according to Berners-Lee, is that anyone, rich or poor, of whatever ethnic origin, can set up a site or blog and express their opinions, giving people a voice who previously never had one.

The fact that millions have been empowered in such a way obviously scares the powers-that-be. In some parts of the world, political censorship of the web is a reality.

In Saudi Arabia, a law was passed in January requiring all sites to apply for a licence from the Ministry of Culture and Information, with anyone breaching the law facing a fine of up to £16,000. In China, a government body was set up earlier this month to control information on the internet.

If you thought that here in Europe the net was safe from government control, think again. French President Nicolas Sarkozy has led the calls for tougher regulation.


‘‘The world you represent is not a parallel universe where legal and moral rules and more generally all the basic rules that govern society in democratic countries do not apply,” he told 800 executives of the internet industry at the first e-G8 forum in Paris last week.


In Britain, the establishment fightback against the Twitter users who broke the news of Ryan Giggs’s injunction has already begun.


Attorney General Dominic Grieve has said that people who leaked the information would be in for a “rude shock”.


On Thursday, Twitter announced that it would, if “legally required”, hand over users details to the authorities, despite the site being outside the jurisdiction of our courts.


Freedom of the internet should not mean the freedom of people to spread false or libellous information about individuals with impunity but, at the same time, information which should be in the public domain should not be suppressed. So-called “gagging orders”, designed to protect people involved in a criminal trial and whose safety might be at risk if their details were published, have been used increasingly in recent years by film-stars, tv personalities or millionaire footballers such as Ryan Giggs to prevent coverage of matters they’d rather not come to light on the grounds that exposure threatens their “right to privacy”.


Now though, thanks to Tim Berners-Lee’s invention, the people are one step ahead. It’s hard to feel too much sympathy for those who live their life in the public eye and earn vast sums partly because of their high profile, attempting to prevent newspapers reporting on their private lives.


If Ryan Giggs had been a single man then his liaison with a reality tv star wouldn’t have been such a big deal but he’s not. Giggs is one of Britain’s top footballers who for the past 20 years has played for one of the most successful teams in the country. He is also married with two children and as such his affair constitutes a legitimate news story.


As did Chelsea and England star John Terry’s fling with Vanessa Perroncel soon after she split from team-mate Wayne Bridge. Terry, a married father of two, had sought a gagging order to protect his privacy but that was overturned early last year. Terry may have been unlucky as these days it seems orders are granted with increasing frequency but do we really want to go back to the Thirties when our newspapers, unlike those elsewhere, failed to report the affair between Edward VIII and Mrs Simpson until the month he abdicated? That said, the nature of Twitter takes the debate about internet freedom into new territory. Once again, we should pay attention to Tim Berners-Lee.


Although he is a Twitter user he admits: “Twitter isn’t designed for the middle ground or reasoned discussion.”


Part of the problem is that tweets are restricted to 140 characters so it lends itself to snappy and sometimes ill-informed comments about, say, Ryan Giggs or John Terry.


Although more regulation of such sites would prevent some abuses the greater danger is that recent events are used as an excuse by the authorities to clamp down on a medium which has given the people the edge over the elite.


Tim Berners-Lee’s goal of keeping the internet as free as a blank sheet of paper presents many challenges but it is undoubtedly a worthy one.


● Sir Tim Berners-Lee has been named as one of the 100 Most Influential Minds of the 20th Century.

The campaign for greater government control of the internet in America goes under the innocuous name of "net neutrality."

What this means is that Internet Service Providers (ISPs) must treat each Internet Protocol (IP) packet passing through their networks equally, regardless of their origin or destination.

Net neutrality is the Internet equivalent of the government telling FedEx exactly how they are going to get a parcel from London to Stockton-on-Tees. A recipe for disaster, in my opinion.

The relative lack of government interference in the Internet (at least in freer societies) has helped the Internet to be the wonderful thing that it is.