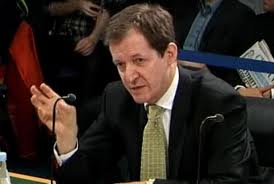 Alastair Campbell and Tony Blair were accused of lying to the Iraq Inquiry yesterday after devastating secret evidence was declassified.

A furious former spy chief wrote to Sir John Chilcot, the Inquiry chairman, to complain that the former Downing Street spin doctor failed to tell the truth about the dodgy dossier on Saddam Hussein’s weapons of mass destruction.

When Campbell gave evidence in January 2010, he vociferously denied that the dossier on Saddam’s arsenal was specifically drawn up to ‘make the case for war’.

But Major-General Michael Laurie, who was head of intelligence collection for the Defence Intelligence Agency, has become the first senior spy to flatly contradict the spin doctor’s claims.

In an email to Sir John, published for the first time yesterday, General Laurie said: ‘Alastair Campbell said to the inquiry that the purpose of the dossier was not “to make a case for war”. I had no doubt at that time this was exactly its purpose and these very words were used.

You can read the whole report here.

Tony Blair is a disgraced and discredited figure, regarded by millions of people around the world as a war criminal. But why does his former side-kick still receive deferential treatment whenever he appears on tv?
Posted by Neil Clark at 08:35

Does it matter to you that Hassan Ghul, the person who gave the US the real name of Osama bin Laden's courier, Abu Ahmad Al-Kuwaiti, was captured in Iraq?

If PM Cameron asked for your advice on how to protect the UK from Islamic terrorism, what would you tell him?

No, nothing like this matters to the writer. You see, he has an agenda - as do many in and around the British meeja. The agenda is to get the story out that, as he puts it (contrary to the facts!), "Tony Blair is a disgraced figure". That way he thinks he can coax readers to ignore ALL the issues surrounding Iraq, the decisions and fighting and defeating terrorism. And whatever you do, don't suggest that Saddam was up to anything iffy before the invasion!

Douglas- it was the US-led invasion of Iraq which made the place a magnet for jihadists.
How do you protect the UK, or the US, from Islamic terrorism by illegal invading a Muslim country (Iraq) which had no links with al-Qaida?

‘But why does his former side-kick still receive deferential treatment whenever he appears on tv?’

Because Blair’s only real offence in the eyes of the mainstream media was to play a bad hand at Iraq. Many ‘liberal interventionists’ were calling for WWIII on behalf of tie-chewing Saakashvilli and his brave use of tanks and aircraft against civilians, even as they were throwing tomatoes at their erstwhile man of the moment. Because no British soldiers were killed in Serbia and the Serbs gave in to uncle toms after the war there no-one criticises Blair for his actions there.

There’s no real philosophical or ideological disagreement with Blair and the MSM.

anonymous: Tony Blair disgraced himself by taking us into illegal wars under false pretexts.
The ones with an agenda are the neocons.

I'm disappointed in your responses to my two questions, and your unwillingness to answer them directly.

I grasp, from having read your blog for a while, that your answer to my first question is "No, Operation Iraqi Freedom was wrong on principle, so it's irrelevant that the people who led to the death of Osama bin Laden were captured in Iraq." Is that correct? That would at least be something we could debate on the merits of the idea.

I don't really know what your answer to my second question might be. I know your readers don't consider Islamic terrorism to be a big deal. Maybe they should talk to the families of the victims of the 7/7/2006 London bombings. If PM Cameron asked you, "Neil, what should we do to prevent another bombing?" what would you tell him. I simply refuse to believe you would tell him "Whatever you do, don't be Tony Blair." He's already not Tony Blair. I believe you have something more substantial to tell him, but I don't know what it is.