Privatised Britain is not a fait accompli 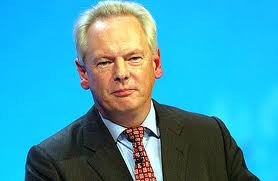 Neil Clark: Keep standing up for the state – a leaked memo shows the coalition fears public reaction to outsourcing of public services.

"A return to the 1990s with whole-scale outsourcing to the private sector – this would be unpalatable to the present administration" Tuesday's leaked memo of a meeting between business chiefs and Francis Maude, the minister for the Cabinet Office – which reveals how the coalition is having second thoughts about the scale of its ambitious and ideologically driven programme of ending the "state's monopoly" of the provision of public services – is undoubtedly welcome.

But supporters of public ownership shouldn't be popping the champagne corks just yet.

You can read the whole of the article here.
Posted by Neil Clark at 21:40

If you believe that there ought to be a middle class for social and cultural reasons, then you have to believe in the political action necessary in order to secure that class's economic basis. Look at Britain today, and you will see the "free" market's overclass and underclass, with less and less of a middle except in the public sector.

Public sector haters are no more in favour of a thriving middle class than they are in favour of family life, or British agriculture, or a British manufacturing base, or small business, all of which are likewise dependent on government action in order to protect them from the ravages of capitalism.

There is no private sector, at least not as that term is ordinarily employed. Not in any advanced country, and not since the War at the latest. Take out bailouts or the permanent promise of them, take out central and local government contracts, take out planning deals and other sweeteners, and take out the guarantee of customer bases by means of public sector pay and the benefits system, and what is there left?

Privatisation, globalisation, deregulation and demutualisation have turned out, in the most spectacular fashion, to have been anything but fiscally responsible. The same is true of a generation of scorn for full employment, leading to the massively increased benefit dependency of the 1980s and the institutionalisation of that mass indolence down to the present day.

Even leaving aside more rarefied academic pursuits, is it fiscally responsible to allow primary education, or healthcare, or public transport, or social housing to fall apart? Is that good for business? Are wars of aggression fiscally responsible? Are military-industrial complexes? Margaret Thatcher gave Britain a legacy of unconservative irresponsibility, fiscal as much as every other kind.

Far from our having grown richer since 1979, we have in fact grown vastly poorer: only a generation ago, a single manual wage provided the wage-earner, his wife and their several children with a quality of life unimaginable even on two professional salaries today. This impoverishment has been so rapid and so extreme that most people, including almost all politicians and commentators, simply refuse to acknowledge that it has happened.

But it has indeed happened. And it is still going on.