Spanish Lessons: What UK's young jobless can learn from Barcelona 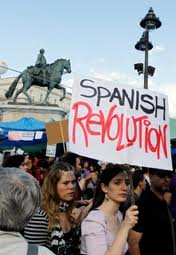 
Judging from Saturday's hopelessly one-sided Champions League final, in which Manchester United were, in Sir Alex Ferguson's own words, "given a hiding" by Barcelona, it's likely to be a few years at least before English football catches up with the super-skilled Catalonian version.

But the Spanish tactics for streets protests – against joblessness among the young and against the power of the banks – is another matter.

You can read the whole article here.
Posted by Neil Clark at 10:38

Must be agreeable to live in a country where they actually have the courage to instigate street protests unrelated to either sport or SlutWalks.

Looks like the Spanish still have something of a civil society. While this may be ironic coming from me, a person who spends way too much time on the computer as it is, I think perhaps the Spanish reaction may be a result of the Spaniards avoiding becoming hooked on television and the computer as so many Americans are.

I personally think all the talk about revolutions being started on Facebook and Twitter is overblown. If people don’t get away from their screens they can’t accomplish anything, let alone changing their government. My understanding is that the role of labor unions and other more traditional forms of organization have been tragically under reported in the media.

It seems like the Mediterranean countries still have a more traditional way of life with more social cohesiveness, which may explain why the Arabs, Greeks, and Spaniards are not sitting down and taking attacks from the plutocrats, while the Americans, Irish, and others seem less rebellious, for now at least.