Holbrooke and Karadzic: Here's the Deal 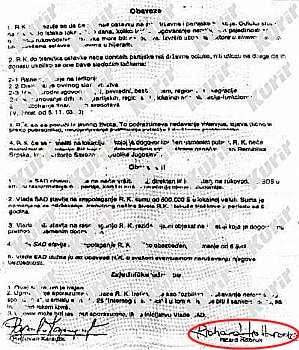 Former US negotiator Richard Holbrooke told CNN that Radovan Karadzic's allegations that he had cut a deal with the US were false.

Do you believe him?

Well, above is a copy, in Serbian, of a written agreement between Holbrooke and Karadzic, courtesy of the Serbian newspaper Kurir, and Svetlana's Byzantine Sacred Art blog.

And below you can read an English translation of the terms.

Then you can make your own minds up as to the veracity of Mr Holbrooke's statement.

Obligations
1. RK is under obligation to submit his resignation to all the state and [political] party functions. Decision comes to force within 90 days, as needed to settle the necessary issues with the rest of leadership. Resignation has to be irretrievable. Influence the leading party officials in a direction of easing the resignation issue and the change in the hierarchy.
2. Until submitting his resignation, RK will not be reaching political or state decisions, nor will he influence others to reach decisions pertaining to any of the following:
2-1 Combat operations on the territory of BiH [Bosnia-Herzegovina]
2-2 Moving the civilian population
2-3 The international agreements: military, economic, security, regional integrations
2-4 Appointing the state, party, regional, cultural administrations, functionaries
2-5 Relocating the financial means
(in force from 5.11.03:30)

3. RK will withdraw from the public life. This includes refusing to give interviews, statements (in person or through the intermediaries), non-publishing [illegible] of political and current problems.

I think both Holbrooke andKaradzic are pretty unsavoury characters. They are welcome to each other.

That he acepted it doesn't make Karadzic look heroic, though as a fellow member of the hu7man race I can understand it.

Apparently there are some on Serb witneses too.

It could be argued that legally the US government didn't have the right to offer it so it doesn't count.

What it does prove is that the word of officials from NATO states is valueless, not only in diplomatic terms such as the Helsinki Treaty guarantee to support the territorial integrity of European states, but also as testimony in "court".

Would Holbrooke have some sort of position in an Obama administration? I believe he would.

Well done for coming up with that, Neil.

I am an American. Born and raised here. Old family back to the 17th century America.

So, let me tell you what I think of Holbrooke and most American leaders and their diplomats.

Holbrooke is a liar just as much a liar as President Clinton ( I did not have sex with that woman...).

And lest we forget, the present LIAR-in-CHIEF: George W. Bush. The Bush who got us tangled up in a useless war in Iraq which was based on a series of lies.

The list of American leaders who lie is very long and very OLD.

Ask the native peoples of America how well the US Govt. fulfills the promises and the treaties signed with them.

In America we ask, how can you tell a politician is lying?

To the native peoples he also has a forked tongue.

I think the USA has some explaining to do as to why they would give $600,000, guards and housing to a person they thought was a war criminal.

Or just maybe they knew he wasn't a criminal afterall. Perhaps he was a mere political "nusiance" to their plans to militarily occupy the former Yugoslavia.

Ah, my tax dollars at work....paying for lies and more lies.

Karadzic was not an independent operative, which seems to be your emerging line of self-defence over your pro-Serb attitudes. No one appears to be claiming that his known contact with Milosevic at the end of 1991 is black propaganda.

Holbrooke being a liar doesn't make Karadzic less of a monster Neil.

Suppored with 100.000 annually for 6 years and provided with 6 American bodyguards.
AND HE IS NOT AN AMERICAN PROTEGE WHO PASSED HIS USE-BY-DATE.

Those who care about the truth know that serbian army was a hired guns in the posnian war and had it's nails clipped when finished the job.

The neo con government has a lot to answer for.

Hitler and Stalin, now have an American Anti Christ ... to add to the annuls of greatest atrocities in human history.

You are right Nick, it doesn't. The only thing that would make Karadzic a monster would be real evidence produced in an uncorrupt court. They never managed, in 4 1/2 years, to find any against Milosevic & it seems quite likely that will be repeated.

Meanwhile in real trials the assumption is inocent until proven guilty.

And the refusal to indict people like Holbrooke, who, as well as being liars, have particpated in war crimes, proves that any "trail" of Karadzic wil be corrupt.

So this is your threshold, for a "(comment edited by moderator)" addition. The comments cut from above were:

"As someone once said, just because [the] "Daily Telegraph" says it is true does not mean it isn't. Oh yes, sorry you used to write for them."

David Lindsay has the same habit; you clearly share a similar dislike of irreverence. Sad. Perhaps what you meant by "the nastier, aggressive and more spiteful comedies of today" comment in your adjacent and umpteenth "Dad's Army" thread.

'Philip'- the only reason your comment was edited was because you wrote something that simply wasn't true- namely that I 'used' to write for the DT. I still do.
http://www.telegraph.co.uk/arts/main.jhtml?xml=/arts/2008/05/17/bobiggles.xml

There is a difference between irreverence- and being aggressive, rude and nasty and I think most of today's comedies overstep the mark.

You're quite right Neil Craig, I'm in danger of prejudging the issue - for which I apologise. All we know at the moment is that crimes were committed by the army under the control of the self-styled Republika Srbska, and that Mr Karadzic was the man charged with responsibility for that army. The rest will have to wait a while. As for Mr Holbrooke, maybe he should be occupying the next cell, if anyone can come up with the required evidence.