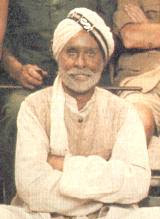 What do you remember about thirty years ago today- 11th Jan 1978? I remember the day quite well, but for a sad reason. I came home from school to be told the news that the actor Michael Bates who played Indian bearer Rangi Ram, in one of my favourite tv programmes- It Ain’t Half Hot Mum had died of cancer. He was only 57.

Rangi Ram was one of the funniest characters is one of the funniest comedy series of all time. (A series that, to the great shame of the humourless types who now run the BBC and who think that repulsive 'let's sneer at the plebs' shows like ‘Little Britain‘ represent ‘comedy‘, has not been repeated on terrestrial television since 1984).

Bates, who was born in India and spoke fluent Urdu, played his role quite brilliantly. Although IAHHM carried on until 1981, the series undoubtedly lost something when Bates died. As a tribute to Bates, here’s a classic clip from IAHHM in which Rangi Ram is asked, by bullying RSM Williams (played so memorably by the incomparable Windsor Davis) in no uncertain terms, where his loyalties lie.

For those unfamiliar with the show, Bates always ended the show by reciting a wise ‘old Hindu proverb'. There were many very memorable ones, but one of my all-time favourites is:“ house with red lamp over door is not always headquarters of Communist Party". Very wise words indeed for radically minded visitors to Amsterdam and Bangkok.

Enjoy the clip and remember one of Britain’s great comic actors.
Posted by Neil Clark at 00:08

Yes, it was a great show - unfortunately and wrongly labelled racist by the sort of earnest nerds who think that collaborating with tories and anarchist thugs to demonise white working-class people is sufficient to prove they are 'good' people.

Neil, you should write something about my own personal favourite sit come from the 70s which still has relevance today-Shelley. He is the ultimate example of an many bloggers such as myself who are overeducated failures who'd prefer a life of sloth and moaning about how rubbish much of modern life is. The second series when he returned to Thatcher's Britain took on a directly critical stance against the values of that period and which are with us now.

Few good sit-coms are produced today. I think the reason for this is that the hyperactive and egotistical obsession , 'empowerment' and 'success' has dehumanised public life so much that there is no longer a place for the eccentric.

British sitcomes were based on a very human ability to laugh and yet empathise with people who were often failures but schemers and dreamers.

Such people no longer have a place in British society where only the egotistic cult of self promotion and the creation of an image of total perfection is aspired to. Or else a cool and cocky hedonism.

Shelley was the ultimate blogger before the internet was invented. His tirades were funny and, increasingly, spot on.

Did you watch the show and is it one of your favourites ?

Yes, Shelley was great and it would be brilliant if it was repeated on terrestial television today. Do you also remember the early 1980s series 'It Takes a Worried Man', which was also created and written by Peter Tilbury?

It beggars belief that some people claim that sitcoms are as good today- in the 1970s there were at least 10 sitcoms that could be classed as all-time classics.

I totally agree with you that hyperactive and egotistical obsession and the way 'empowerement' and success' has dehumanised public life. As Erich Fromm said the danger of the past was that man became slaves- the danger of the future is than men become robots. Turbo-capitalism doesn't just want identikit town centres, it wants identikit people: it certainly doesn't want to produce characters like Shelley. It's sad because Britain used to be famed for its eccentrics- now it's probably the country in Europe where eccentrics would feel least at home as there is so much pressure to 'conform', not just in terms of 'acceptable' views, but in dress and style of speech.

You are lucky to be in a country that is still 'behind the times' in this regard, though if the governing Coalition has its way, they'll be just like Britain in a few years time.

ps many congratulations on your blog.

I know this piece is a few years old but I was looking at Michael Bates on the web and realized he is in one of my favourite films of all time. Giving another fantastic comic performance as the stiff and proper prison guard in Stanley Kubrick's film A Clockwork Orange. Great career in a life cut short.