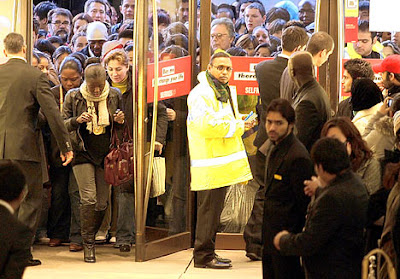 This essay of mine appears in today's Morning Star.

“It is only with the heart that one can see rightly. What is essential is invisible to the eye” wrote Antoine de Saint Exupery, in his classic tale The Little Prince.

I thought of de Saint Exupery’s wise words when I recently returned to Britain after spending some time in Europe.

Britain may be at the same level- or even ’ahead’ of the rest of Europe when it comes to the latest mobile phones or computer games, but, when it comes to the most important things in life- the quality of human interaction, solidarity between people and a rich cultural life- it sadly lags a long way behind.

It does so, not because people in Britain are inherently less sociable or less intelligent than in other European countries, but because, in Britain, we have easily the most rapacious, dehumanising and demoralising capitalist system that exists anywhere on the continent.

What British-style turbo-capitalism wants is not a cultured, well-educated population who read books and discuss political and sociological issues, but materialistic, under-educated consumers: people who will unleash their frustrations at living such unfulfilled, alienated lives not through political agitation and questioning the structure of society but by getting "smashed" each and every weekend.

As long as the masses carry on buying the consumer goods that Nazi-style marketing techniques brainwash them into believing they must possess, turbo-capitalism is content. Concepts such as social interaction, solidarity, culture and education for education’s sake don’t come into it, because they simply don‘t translate into profits for the greedy companies that call all the shots.

The dumbing down of television and films is an integral part of the turbo-capitalist scheme that seeks to reduce all of us to materialistic, narcissistic zombies.

The process is not just happening in Britain, but in other countries foolish enough to follow our economic path.

In an article in the New Statesman, my wife Zsuzsanna, who grew up under socialism in Hungary in the 1970s and 80s, compared cultural life then and now. Saturday night prime time when Zsuzsanna was growing up invariably meant a Jules Verne adventure, a variety show and a live theatre performance. Foreign imports included the BBC‘s classic serial The Forsyte Saga and David Attenborough’s wildlife documentaries whilst one of the most popular and talked about programmes of the entire period was ‘Poetry for Everyone’, in which a famous actor or actress would each night recite a different poem.

Today, nineteen years on from ‘regime change‘, the position could not be more different. TV schedules abound with soap operas, sensationalist-style news programmes, and of course ‘reality’ tv. Prime time terrestrial television in Hungary in the 21st century no longer means poetry recitals, but a choice between ‘Big Brother’ or the equally vapid Hungarian version- ‘Real World’.

The question which must always be asked when try to understand why these changes occurred is, who beneifts? The answer is the big multinational corporations, whose only interest is profit maximisation, regardless of the social costs. The global corporations and financial institutions which play such a dominant role in our lives today don’t want societies of well-educated, reflective people who read and enjoy poetry, debate political ideologies and discuss the works of Aldous Huxley or Carl Jung, but a nation of materialistic, intellectually shallow consumers, obsessed by brand marks and designer logos.

The cost which such a rapacious and soul-destroying economic system exacts on our collective mental health is enormous. More than two million Britons are on antidepressants, a million on Class A drugs. Binge drinking, and what the great German social psychologist Erich Fromm called "acts of destruction" - violence, self-abuse and vandalism - have reached record levels. The Samaritans report that five million people in Britain are "extremely stressed". And last year, a Unicef report listed Britain's brands obsessed children as the unhappiest in Europe.

Elsewhere in Europe things are better because there are still fences put around areas where big business is not allowed to go. Supermarkets and shops stay closed on Sundays- and in many countries on Saturday afternoons too. People still celebrate traditional festivals, which have not become commercialised spend-fests. Children are still treated as children, not as young adults to be bombarded with advertising.

Neighbourhood bars still predominate, places where people of all ages can meet and socialise, or play cards or chess- in contrast to the plc owned ‘horizontal drinking’ chain bars in Britain which only want us to drink as much as possible in as short as possible time.

Yet despite its clear advantages, the mixed economy Rhineland model is under pressure from the more aggressive Anglo-Saxon form of capitalism which has done so much damage to Britain‘s social fabric.

In the interests of our common humanity, it is imperative that the turbo capitalist model be derailed as quickly as possible and replaced by one which puts the real needs of people, and not of capital, first.

It might mean less profits for the few, but for our increasingly dysfunctional and unhappy society, it’s the only path to salvation.
Posted by Neil Clark at 11:55

Well said, I think the likes of you and I need to be pushing Oliver James new book 'The Selfish Capitalist', which are know you are doing.

Capitalism not good for the planet or ironically our prosperity

I live in America and people here are living in the pinnacle of the 'turbo capitalist' model - yet have much better social interaction, friendship and civility than the Brits. Thanksgiving is excellent proof of a totally uncommercialised secular festival that strengthens friendships and families. Britain doesn't have anything like that.

No, blaming 'turbo capitalism' is just dreary socialist propoganda. The basic inescapable truth is that Brits just AREN'T as friendly as other foreign cultures.

I was interested by Zsuzsanna's input... I visited Hungary a few years ago and the people I spoke to seemed to remember it being a miserable and dreary place under communism. That's why they had the (brutally subdued) uprising, wasn't it?

Along with your rose-tinted reminisence of visiting communist-era Belgrade, it seems you want to turn the clock back to a socialist fantasy world that never actually existed.

Nostalgia just isn't what it used to be.

Roland: I fully agree that America is a generally friendlier place that Britain. I found New York incredibly friendly when I visited in 2006, and wrote about it on the blog. But don't understimate the social problems in the US too, the high crime rates, drug/alcohol abuse. You accuse me of wanting to turn the clock back to 'socialist fantasy world' that never existed, but in the piece I also say that things are much better in continental Europe, where turbo capitalism has still to dominate.

re Hungary: How old were the people you spoke to? The Stalinist Rakosi years in the late 40s and 50s were undoubtedly miserable and dreary, but Zsuzsanna was writing about the era of Kadar's 'goulash communism' in 70s and 80s when things were much better.

Truly, Britain is the Sick Man of Europe.

I will admit, I only spoke to a few people of roughly my own age. I defer to the fact that you're wife is actually Hungarian!

I'll have to ask my brother. He lived in Budapest for something like five or six years.

I will admit, life in France is refreshing with shops closing at 5pm and off at weekends. It's a lovely way of life.

However, the upshot of that is you earn less and things cost more.

I think I'm incredibly lucky to have the option of choosing which way of life I want (American or European) since so many people are stuck with one or the other (and generally yearn for the opposite of what they've got.)

On the face of it, I'm a dirty stinking capitalist - but a world with corporations gone wild is just as scary to me as socialism. Somewhere in between - a generally free market with some sensible government regulations - would be best for everybody.

One reason why John Edwards isn't too bad a bet in the next election over here. I'm either for Obama or McCain (I can't vote, so it really doesn't matter) but Edwards has some sensible ideas about reining in the explosion of corporate greed and giving the regular working stiff a chance to make a go of it.

Have you read "An Army of Davids" by Glenn Reynolds, a.k.a Instapundit? It came out about a year and a half ago. The idea is that technology has empowered individuals to do things they wouldn't be able to do otherwise.

You seem to think that capitalism is about making everything bigger, but small and big seem to go together. For example, marketing guru Seth Rogen wrote a book called "Small is the new Big"

You seem to think that capitalism is the enemy of social interaction. Capitalism is about creating value for people, and part of that value is a place for people to hang out.

I suggest that hulme dont look too deep into the Dirty Hungarian Phrasebook as he has in the Dirty Albanian lies book....

I read your article in the Morning Star and agree with you that large areas of our society have become saturated by commercialism of the worst type. There are though still many parts of the country that retain a traditional British character, I mean a quiet Sunday traditional dinner and shopping locally. Have you read "Bonfire of the Brands" by Neil Boorman?
Rampant capitalism is destroying a great deal of culture by homogenisation and suffocating advertising. Cuba is one of those countries where there is no advertising boards, no advertising on tv, no Macdonalds or ghastly Starbucks but where science, culture,art and sport flourishes without brand sponsorship. Cuba is the brand!

My own pennyworth of cultural nostalgia (and lament) was thirty years ago, watching on a Friday night a season of films by Luis Bunuel...on BBC2! I was fifteen, much of what I watched bewildered me, but I was enraptured. Such an opportunity would be unimaginable now...