A Crisis of the West's Own Making 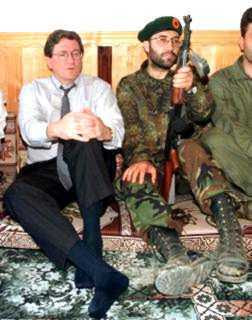 Due to the Christmas/New Year break, I've got a backlog of published articles for posting. This article of mine on the current Kosovo crisis appeared over Christmas in The Australian. I'll be posting my reflections on the first round of the Presidential elections in Serbia shortly.

POWERFUL Western nations make threats to Serbia. Serbia, backed by Russia, ignores the ultimatums. A war ensues. That was the scenario in the summer of 1914, when the world plunged into the war to end all wars. Nearly a century on, the situation is uncannily similar.

Despite Western threats for it to accept Kosovan independence, Belgrade is standing firm. Serbian armed forces are on standby to reclaim the province by force if necessary. Russia has promised Serbia its support.

If war does follow, then Serbia will no doubt be blamed by Western governments for not toeing the line. But it would be an unfair judgment.

The present crisis in Kosovo has been caused not so much by Serbian intransigence, but by the West's policy of intervention in the internal affairs of sovereign states, which, over the past decade has caused chaos, not only in the Balkans, but across the globe.

Ten years ago, Kosovo was at relative peace. Albanian demands for independence from Belgrade were being channeled through the peaceful Democratic League party of Ibrahim Rugova, while the small groups of Albanian paramilitaries that did exist were isolated and had little public support.

According to a report by Jane's intelligence agency in 1996, the Kosovo Liberation Army, the most extreme of Albanian paramilitary groups, does not take into consideration the political or economic importance of its victims, nor does it seem at all capable of hurting its enemy. It has not come close to challenging the region's balance of military power. As late as November 1997, the KLA, officially classified by the US as a terrorist organisation, could, it has been estimated, call on the services of only 200 men.

Then, in a policy shift whose repercussions we are witnessing today, the West started to interfere big time. The US, Germany and Britain increasingly saw the KLA as a proxy force which could help them achieve their goal of destabilising and eventually removing from power the regime of Slobodan Milosevic, which showed no inclination to join Euro-Atlantic structures.

Over the following year, the KLA underwent a drastic makeover. The group was taken off the US State Department's list of terrorist organisations and, as with the Mujahideen in Afghanistan a decade or so earlier, became fully fledged freedom fighters. Large-scale assistance was given to the KLA by Western security forces. Britain organised secret training camps in northern Albania. The German secret service provided uniforms, weapons and instructors. The Sunday Times in Britain published a report stating that American intelligence agents admitted they helped to train the KLA before NATO's bombing of Yugoslavia. Meanwhile, Rugova's Democratic League, which supported negotiations with Belgrade, was given the cold shoulder.

When the KLA's campaign of violence, directed not only against Yugoslav state officials, Serb civilians and Albanian collaborators who did not support their extremist agenda, led to a military response from Belgrade, the British and Americans were ready to hand out the ultimatums.

During the 79-day NATO bombing of Yugoslavia that followed, the West made promises of independence to the KLA which, eight years on, are coming back to haunt them.

Recognising an independent Kosovo will push Serbia from the Western orbit as well as creating a real chance of war. And it will set a precedent: if the rights of self-determination for Kosovan Albanians are to be acknowledged, then what about the rights of self-determination for Serbs in Bosnia, who wish to join Serbia?
Doing a U-turn, and attempting to get independence postponed, runs the risk of violence from Kosovo's Albanian majority. It's an almighty mess, but one of the West's own making.

Had it not intervened in Yugoslav internal affairs 10 years ago, it is likely a peaceful compromise to the Kosovan problem would eventually have been found between the government in Belgrade and the Democratic League. Rugova's goal was independence for Kosovo from Serbia, but only with the agreement of all parties.

What is certain is that without Western patronage the KLA would never have grown to the force it eventually became. By championing the most hardline force in Kosovo, the West not only helped precipitate war, but made the issue of Kosovo much harder to solve.

It is ironic that for supporters of liberal intervention, Western actions in Kosovo are still seen to have been a great success. It was at the height of the NATO bombing campaign against Yugoslavia in 1999 that the then British prime minister, Tony Blair, made his famous speech at Chicago in which he outlined his doctrine of the international community.

Blair argued that the principle of non-interference in the affairs of sovereign states - long considered an important principle of international order - should be subject to revision. "I say to you: never fall again for the doctrine of isolationism," Blair pleaded.

But after surveying the global debris of a decade of Western interference, from the Balkans to Afghanistan and Iraq, is it any wonder that isolationism and observing the principle of non-interference in the affairs of sovereign states again seems so appealing?
Posted by Neil Clark at 20:41

Hi Neil, thanks for an article but couple of corrections.

Rugova and his party were not peaceful, they were rejectionists bent on uncomprising albanian expansion and were supported foreign agitators only for the time . He was belligerent because he got promises of what was to come from his bosses in Washington and certain european circles. Rugova never condemned violence before or after occupation and indeed praised it in many ways. If there were any peaceful albanians they were killed by other albanians. I suggest you read an article from Nebojsa Malic An Insult to Gandhi
http://www.antiwar.com/malic/?articleid=8436

Milosevic never really expressed opposition to the west or any type of alliance, he was always indeed pro western often sacrificing his people and land in order to appease so called western/american demands which in turn demanded more and more. But what was happening here is that imperial power which happened to be america at this time wanted to dominate and occupy a region with its allies and proxies and for that they figured to destroy Serbia as much as possible as the only possible strong and unifying state.

Imperial powers led by America then decided to go on an offensive pitch and basically forming so called kla which is a terrorist organization if there were any , they were kiling unarmed people , kidnap and other criminal activity to sow terror and chaos and allow nato a pretext to invade.

The similar thing is happening in the middle east where Iraq and Iran being 2 biggest states with oil and enemies of Israel were marked for destruction no matter what led primarily by America again. People in these countries were not anti western but that's not an issue with imperial powers .

As for any solutions, well there is none as that's not a priority of imperial powers who hold powers for now. They never really invaded Serbia or Iraq for that matter looking for solutions to any problems but to excerbate it and flaunt their own power but like anything in life, power is relative and can reverse steadily and then those who relied on power alone will get bankrupt and left at mercy of justice.

Well, I'm not so sure about that. I think Milosevic DID have a hand in breaking up Yugoslavia. Let's not forget THAT Memorandum that was written by the Serbian Academy.

Can I ask Neil what he thinks of Tim Judah's version of the Balkan Wars and also that of Misha Glenny ?

Also, there is a lot of information about the KLA which tends to suggest that the Great Powers ie the international community directly funded the KLA.

This organisation murdered Serbs and drove other minorities from Kosovo.

I recently read Norman Davies' account of WW2 and realised that , in any war, there are no simplistic aspects to it. Like the fact the Allies falied to defend Warsaw in 1944.

After telling Poles they should rebel. THey did do with great courage. Many of my wife's family were killed for that. They were part of the AK, patriots and believers in democracy.

They were killed after putting up futile resistance in Nowy Sacz.

I'd like Neil's opinion on that and whether he has read Norman Davies.

Karl, you are obviously heavily biased if you quote Judah and Glenny , one a paid propagandist and the other a self righteous pseudo historian

Personally I think Misha Glenny is directly employed by MI6.

For an assessment of Tim Judah (and everything else) read Diana Johnstone's 'Fool's Crusade'.

Glenny on Milosevic 'First, the historical record of Slobodan Milosevic. He won power by manipulating the mechanisms of a one-party state, toppling his mentor and close friend of 20 years, Ivan Stambolic, in a process of unadulterated Stalinism. (In 2000 his henchmen completed the parricide by murdering Stambolic.) He whipped up Serbian nationalism to strengthen his power base in the Yugoslav federation. He never won a democratic election that he didn't rig. He stole hundreds of millions of dollars for his family and cronies. He was a nepotist. He bore chief responsibility for the break-up of Yugoslavia (only Franjo Tudjman, the Croatian leader, comes close) and for the subsequent wars. Armies and militias under his influence killed tens of thousands. And at home in Serbia, he and the mafia that he employed to ransack the state murdered their opponents at will'.
A favourable view of Milosevic !