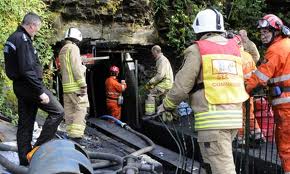 What terrible news about the four miners found dead in a flooded mine near Cilybebyll in South Wales.

The National Union of Mineworkers (NUM) is worried that these privately-controlled facilities, which barely employ more than a dozen workers at any one time, operate largely "under the radar" of mine inspectors – if only because they are usually situated on remote hillsides.

Chris Kitchen, general secretary of the NUM, said: "We have grave concerns about safety standards in these kinds of mines. We fear that safety is often set at minimum standards so that costs can be kept down. They are not generally unionised or easily visited by inspectors."