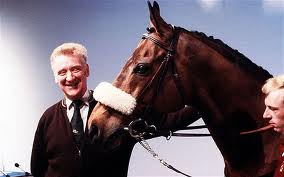 HE was the blunt, plain-talking Northerner whose name will forever be associated with Britain’s most famous horse race – and its best-loved racehorse.

Donald “Ginger” McCain, who died two days away from his 81st birthday, was the man who trained the legendary Red Rum to an unprecedented three Grand National victories in the seventies. But he wasn’t just a great trainer he was also one of racing’s most colourful and outspoken characters.

You can read the whole of my Daily Express piece on the late Ginger McCain here.

And you can watch a re-run of the classic 1973 Grand National, in which Red Rum overhauled Crisp in the dying strides, here.
Posted by Neil Clark at 12:03