Why we should nationalise our airports 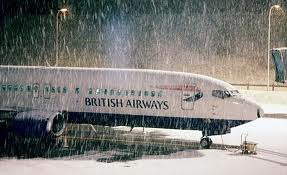 This piece of mine appears on the Guardian's Comment is Free website.
Neil Clark: The failure of BAA to deal with recent snowfalls has exposed the price we pay for having our infrastructure in private ownership.
"The government's objective with this bill is to liberate airport management from political interference … to enable airport operators to respond to the needs of their customers, rather than to the shifting priorities of politicians and officials," declared the Earl of Caithness as he moved the Thatcher government's 1986 airports bill in the House of Lords, which was soon to become the 1986 Airports Act. The privatisation of the state-owned British Airports Authority (BAA), we were told, would ensure that "better services are provided for all airline passengers".
I wonder if the Earl of Caithness (or even Margaret Thatcher herself), would have the courage to pop down to Hounslow and tell that to the tens of thousands of holidaymakers stranded at the BAA-owned Heathrow airport for the past three days.

You can read the whole of the piece here.
Posted by Neil Clark at 19:51

Well said, Neil. And still, nobody dares suggest that privatisation may be a bad thing...

When I was last at Heathrow in 2009 - for the first time in 19 years - I was staggered at how run-down it had become. I repeatedly lost my way, because (a) there were no adequate signs, (b) none of the passers-by whom I approached could speak intelligibile English. The prevailing smell of vomit was something else I could readily have done without.

And then the apparatchik who examined my passport (I had just stepped off a flight all the way from Melbourne) gave me the third degree about my intention to stay - as a paying guest - at Ealing Abbey. "But you aren't a monk!" he kept saying.

Never, if I can avoid it, shall I set foot in Heathrow again. Meanwhile, although the concept of snow is hardly unknown on the Continent, I have never experienced anything like such misery at the airports of Rome, Amsterdam, Paris, or Brussels.

Great article, Mr. Clark. It is interesting that public ownership is associated with being "archaic." I say great, more reason for real conservatives to support public ownership. If conservatism is, in part, about conserving civilized standards, what could be more anti-conservative than the buccaneering spirit that turns everything into a mad rush for profit?

Furthermore, it sounds like being archaic in the specific context of British airports is not such a bad thing if the formerly
state-owned airports were superior. The neoliberals always try to paint the post-war era as some kind of statist hell, but the evidence really does seem to suggest that, in many respects, things really were better back then.

Though wisdom cannot be gotten for gold, still less can it be gotten without it.
Instant cash UK

Sorry, my comment above was meant to be a joke at the Guardian's expenses, but reading it now I realise it might seem as if I was having a go at you - that wasn't my intention!

The argument for nationalisiation depends entkirely on the assymption that the politicians would be more willing to spend money to prepare for svow.

Since (A) the politicians are running the roads & even worse (B) the politicians have spent the last decade assuring us that by now snow is so rare that "Children just aren't going to know what snow is" the assumption that they can be trusted to deal with ir seems improbable.

If you want a successful socialist movement, or indeed government, the first requirements must be that the leaders be moderately honest & fit to run a whelk stall (& preferably not war criminals). They are obviously none of these. Until then they should not run a government.

hi everyone- thanks for the comments.

olching- many thanks- disappointed that you're no longer blogging.

Peter- will still keep the jumper and shirt pic on this blog! Actually one of the best socialists I ever knew was always dressed in a suit. And Richard Branson, one of the biggest capitalists out there, never wears a suit...

RJ- Heathrow is a truly appalling place. I can imagine few things worse than being trapped there for three days as the poor passengers have been this week.

John- many thanks- good post.'what could be more anti-conservative than the buccaneering spirit that turns everything into a mad rush for profit?'- absoultely. These fanatical neoliberals are destroyers, not conservers. Their latest targets in the UK are the Royal Mail, the NHS and public libraries.

Neil- if we have airports run by plcs they'll always put shareholder profits first. As I've said on the Guardian thread, that
means taking out public seating, and turning airports into shopping malls. It means operating with the bare minimum of staff- and not ordering enough snow ploughs or de-icing equipment. And as a commenter on the Guardian thread says, it even means taking out drinking water points.
Privatised airports have one goal when it comes to passengers- to get them to part with as much money as possible. That's why their atmosphere is so horrible.

Neil the best way to get people to part with their money is to make them comfortable & happy to spend it. Government run airports, government/council depatyments, dole offices etc are under no such compunction & it shows.

It is possible that Heathrow, having been told it is not allowed to expand, no longer feels so much incentive to perform but if so the people who told it it may not expand bear most of the responsibility. And that would be who?

I would have thought it was sound business to have a load of salted grit and a few extra snow ploughs on hand.
The cost of having them in reserve
would n't be more expensive than losing whole days of airport operation would it?
This is the the problem with private sector business: it does n't have the reserve capacity of the public sector.Anything out of the ordinary and they're completely stuck:look at Hurricane Katrina.Mind you the Salvation Army had to dispense emergency help at Heathrow like they did in New Orleans. Big society? Never big enough.

Neil would you have any comments on why you think Northern Ireland's government were right to keep their water company nationalised, thus giving an example of the difference between nationalised & market driven organisations. I grant that because competition in delivery is inherently very limited for water it is an example where government ownership could be justified even if that was not the case for almost every other business.