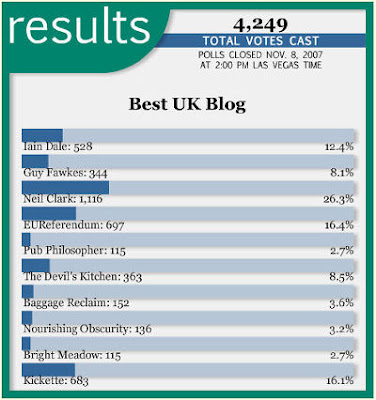 What more can I say? Subject to official confirmation, we have won the Best UK blog award in the 2007 Weblog Awards by a very wide margin. Our final vote toll was 1116 votes, compared to second placed EU Referendum on 697 votes, a lead of 419 votes.
Many, many thanks to every single person who voted for this blog, and many, many thanks too to those blogs who supported the campaign. I will be writing a longer post about the award, and posting a full and proper 'thank you', later.

UPDATE: The result in the 2007 Weblog Awards has been officially confirmed. We won it! And we won it by a landslide! You are now reading the Best UK Blog!
Posted by Neil Clark at 07:25

Kamm has already been practically drummed out. How hard can it be to get rid of Pollard? And let's have you all over the media instead. Out of this, you should at least get a Question Time or Any Questions gig ahead of any of your rivals for this prize. Never mind Olly or Polly in future.

I trust that the Neoconservative Party will be as successful at the ballot box as the anti-Clark campaign by neocon websites has been in this case.

Oh, of course, they don't have a party.

Many Many congratulations my friend! Cigars are on me. Now--keep at 'em!

What does 'Kamm has been practically drummed out?' even mean?

Yes, that is a very fair point. One of the sites has done a this is not what blogging is about postings. Wanna bet, says Ken?

We really need to talk about running in tandem next year... You for the UK spot and me for Latin America...

Or why not you for Best Blog? Shit we could go for it. Getting Mexican votes for you if you were running against Americans. Christ, Neil, we could do it!

Great stuff and I enjoyed legally voting often ;) I agree with the other Neil about keeping the chinless wonders out. What is the saying, if you sit on the riverbank long enough your enemies come floating by.

Shame about the "restoration of capital punishment" bit, however, it just goes to show nobody is perfect...

(though Mikheil Saakashvili would never have been content with only 26% of the votes. Bah.)

Good luck for the future!

Well deserved! And it's about time you got some proper recognition. I spent 3 days this week conscious of the times I could vote and did so, as well as many others I know, who all spread the word. How could we not? You are the last of that rare breed -- a journalist with integrity.

Your blog has been published as a winner, it's official now I think.

Congratulations Neil. you deserve the best.

I don't think, Jailhouselawyer, that they really give a shit. If they did then they would have campaigned.

No, the people who are screaming are the toss-bloggers who thought that Neil was going to come in last.

Congratulations! Standby by for a shiteload of newbies checking your blog!

Well done indeed! Just came across you via Jonathan Calder and wishing you were a Lib Dem!!!!! So agree with so much you are saying, there is still a battle to be had.

Congratulations! I have visited this blog for the first time having seen news of your victory!

Mostly, your blog seems to be about how readers can vote in the 2007 Weblog Awards. Do you do other stuff too?

Way to go, brother, way to go! That will show them! Now do listen to Lindsey and milk it, man, MILK IT!

ps Danijela, just go to Thompson concert, Sieg Heil your a$$ off and shut the f- up!

Congratulations. Are we the only two British winners? My name is Adrian, I'm also a journalist, and my blog won in the health/medical category.

Does this now guarantee us fame and fortune!?

Your win shows that there are lots of un-employed socialists with time on their hands to vote in the weblog awards.

Well done - I have to say I never knew the best UK blog 2007 existed until 5 minutes ago, and a leftie too! I may be but a humble grunt when it comes to blogging, but you've duly been added to my blogroll.