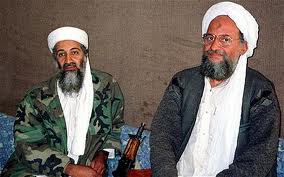 Very depressing story, but it must be heard. Thank you for your work, Mr. Clark.

Thanks very much, John.

Many people (including me) pointed out the connections between the Libyan NTC and Al-Qaeda. However, President Obama didn't ask my opinion before acting against Gaddafi. He's not asking my opinion now, either.

A cynical possibility is that Al-Qaeda is making this pronouncement in an attempt to rehabilitate their brand as a major player in the Islamic world after the death of Osama bin Laden. Perhaps they are trying to rebuild credibility particularly among Sunni Muslims.

I've also been following the selective (if not outright misleading) coverage coming out of Russia and Syria, as well as the non-coverage of the criminal human rights abuses committed by the rebels in Libya. Not a pretty picture.

I greatly appreciate what you're doing here, Mr Clark. Keep up the great writing!

Don't Al-Qaeda also urge support for the Palestinians? Should we therefore get behind Israel more?

Did Al-Qaeda urge support for the Tunisian and Egyptian uprisings? (Not a rhetorical question, I don't know)

If they did then perhaps we should also bemoan the fall of Mubarak and whats-his-name from Tunisia.

At the time, of course, the Arab Spring only affected pro-Western Arab leaders and was therefore a Good Thing (or a Bad Thing)

Now those awkward Arabs have muddied the waters by rising up against anti-Western leaders, which is of course a Bad Thing (or a Good Thing)

It is questionable how much Zawahiri actually had over jihadist movements apart from his own fringe group that amount to no more than 100 people prior to 9/11 certainly not the media Al Qaeda global terrorism myth which was admitted in a Newsweek article a couple of years ago.

At least in the case of Russia despite it being obviously tilted in a pro-Syria direction it is acknowledged that armed groups are instigating a causing the bloodshed something which even the Arab Leagues own report confirms.

Yes they were warned if you promote this Neo-con democracy march in the Mid East supporting and sponsoring all these Mid East Islamic groups they would come to power including Hamas in Palestine or at least have representation in the new governments despite the fact that Muslim immigrants are not even assimilating in Europe.

Czarny, in defence of Mr Clark's position (and as one of the resident Americans in the left-conservative circle), I don't really think it's so much an issue of being on whatever side al-Qaeda is against, so much as having a realistic foreign policy which is not informed either by misguided ideological premises or by old grudges and old friendships which are more costly to maintain than they are worth.

I mean, we helped the Libyan rebels to oust Qadhafi ostensibly to prevent a genocide, and yet right now some very heinous things are happening in Libya which approach that. In Syria, we're on the brink of intervening in a civil war between the FSA and the Syrian government on similar grounds, in spite of numerous leftist and palaeoconservative voices very reasonably explaining why this would be a bad idea. In Russia, we're basically in the midst of a propaganda war in favour of the 'white-ribbon' protest movement, also for ideological reasons. But in doing so, we may be undermining all of the good work that we had been doing with Russia to decrease nuclear weapons on both sides. Which is more in our actual interests?

Though I do have some problems with realism as a prescriptive foreign policy viewpoint, it does often ask the right kinds of questions.

Matthew: Very well put.
On the subject of the 'liberation' of Libya, and the 'very heinous things' going on there now, have you seen this chilling report in the Mail on Sunday?
http://www.dailymail.co.uk/news/article-2099957/Video-proof-Libyas-freedom-fighters-turned-brutal-torturers.html

Thanks for your reply. Reading your comment, it seems that your stance on all of this is more or less identical to mine.

The point I was trying to make is that Neil Clark seems to be suggesting that it DOES matter that Al-Qaeda happens to agree with the West on this issue.

However, take a look at Al-Qaeda's and Mr. Clark's reactions to the Tunisian uprising and you will see that they concur. This does not in itself invalidate Mr. Clark's position.

I am quite sure that my views on Western military presence in Afghanistan match those of Al-Qaeda.

Whatever else we can say about Al-Qaeda, they are certainly consistent when it comes to the 'Arab Spring'. In a way, I am too-- I am consistently sitting on the fence because I do not know enough about these countries, nor is it really my business.

The inconsistent ones are those who were pessimistic pragmatists in Tunisia and Egypt before becoming idealistic revolutionaries in Libya and Syria. And those who went through the same process in reverse.

Hi Czarny,
The point is that we in the west have been told ad infinitum that our biggest enemy is al'Qaida. Yet, time after time, we've been on the same side as the terrorist group. Surely that should make us pause for thought as to what it really is all about?
As I said on RT, what the west really hates most of all is not radical Islamic groups, but secular regimes, and it's willing to encourage religious extremists in order to destablise/topple those regimes. We're seeing that happening again in Syria.

As ever Czarny is saying everything I wanted to.

I don't really get your secular state argument. Yes all those states you name are secular, but the majority of states are.
And it seems at odds with your own narrative. In your recent pieces you have said the West is pressing for a war against Iran, how does that follow your toppling secular state idea?
Likewise with the most recent episodes in Afghanistan.

Hi Ian,
Good to hear from you.
What the US hates most of all is secular regimes which try and paper over, or minimise, religious & ethnic differences, and of course which are not in the western 'camp'. Their strategy has been classic divide and conquer (just think how they encouraged and supported anti-Yugoslavia nationalists and separatists in the Balkans.)
Leaders who talk of/espouse Pan Arabism (the Baathists) or Pan Africanism,(Gaddafi in his later period) or Pan Slavism are seen as a big danger, precisely because of their attempts to bring people together and form blocs, or even new countries, (think of Nasser's UAR) which would be strong enough to prevent western hegemony being established. The US has encouraged nationalists around the world, and religious movements too, when it serves their purpose to destroy these secular regimes.
Iran is obviously not a secular state, but it's being targeted because it is not in the western 'camp'. The idea that it's being targeted BECAUSE it is a religious Islamic state is absurd.
So, as I said to Czarny, we need to think why it is that on so many occasions, the US and al-Qaida are lining up on the same side.

Interesting idea on the states that minimise ethnic differences, but I didn’t understand that from your original arguments. It has some logic to it, with the divide and rule idea, but I am not sure if it is a post-hoc relationship, rather than an actual goal.

Personally I don’t think the hypothesis is correct, but it has got me thinking about the issue.

Neil, check out www.bush-it-usa.com. If you like it, please tell others. "it has just begun", Thanks.

Something to give you and your readers food for thought..Obama rushed to get the US troops out of Iraqwar by the end of 2011. He did this because the Iraqi government had put him in "Check". They refused to extend immunity for war crimes to US soldiers as of 2012. Since war crimes still have immunity in Afghanistan we still have our troops there. After almost three years in office he suddenly ends the war due to fear of prosecution. If it was that easy, why did he not stop it sooner? And why allow the war in Afghanistan to continue? One word, "bush-it"! And this comes from someone in the 'states'. There is much more wrong to be seen in contrast to the public perception of Obama. More to come in the weeks ahead as we draw closer to the election. Hopefully you and the whole world will be watching. Thanks.www.bush-it-usa.com