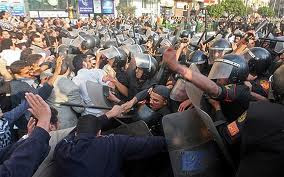 This piece of mine appears in today's First Post.
Neil Clark: These revolts aren’t peculiar to Muslims – they’re about young people having no hope
Tens of thousands of people, fed up with economic hardship, unemployment, and the corruption of their country's ruling elite, gather in their capital city's main square and call for the resignation of their pro-western government and for new elections to be held.
No, I'm not referring to events this week in Cairo, but Belgrade.
While Egypt's disturbances have made front page news the world over, Serbia's huge anti-government protests have gained far less media attention. And the Serbs aren't the only Europeans who are taking to the streets to express their disapproval of their leaders.


In Washington and London, the regimes are fragile and barely democratic. Having long burned down societies abroad, they are now doing something similar at home, with lies and without a mandate. To their victims, the resistance in Cairo’s Liberation Square must seem an inspiration. “We won’t stop,” said the young Egyptian woman on TV, “we won’t go home.” Try kettling a million people in the centre of London, bent on civil disobedience, and try imagining it could not happen.

London? No. highly unlikely...Whats more theres evidence the US in the form of Freedom House is involved in these revolts. From a US embassy cable of jan 2010:

'Â¶4. (SBU) The group included bloggers, journalists, activists
from secular opposition parties such as El-Ghad and the
Democratic Front Party and movements such as "Kifaya" and
"April 6. A lawyer for the group confirmed that a French
activist was among the detainees. Some of the detainees are
participants in Freedom House's "New Generation" program
which provides training for young activists. One member of
the group departed for Washington January 18 to participate
in a Project on Middle East Democracy program. Contacts
confirmed that activist and El-Ghad party member Israa Abdel
Fattah was also part of the group. (Note: Abdel Fattah was
the subject of headlines in April 2008 when she was arrested
and detained for 17 days after her call for an April 6
general strike on Facebook attracted almost 70,000 members

Egypt’s Revolution: Creative Destruction for a ’Greater Middle East’?
by F. William Engdahl*
Controverting majority opinion, F. William Engdahl maintains there is nothing spontaneous about the mass protest movements in Arab countries and sees them as a replay of the US-orchestrated colour revolutions that triggered regime change in post-Soviet countries. The same script and cast of characters are at hand: local opposition leaders coached by the NED and other US-funded organizations in the art of staging "spontaneous" uprisings. The contours of a US covert strategy for the region have been clear for some time. The question is: will it work?

Great article. It is interesting that modern capitalism revolves around a culture of youth worship, with older people spending thousands to look young, with popular culture dominated by the tastes of teenagers and twenty-somethings, yet, when it comes to providing an economic base to allow young people to have a meaningful future, complete with a proper family income, modern capitalism does not do a very good job at all. The great prosperity of neoliberalism is a mirage, a gaudy, neon Potemkin village.