Why did we never know how rotten Tunisia was? 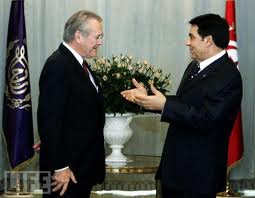 Neil Clark: Thanks to the west taking his side, President Ben Ali got away with his corrupt rule for 23 years
Be honest. Prior to last week's dramatic events, had you ever heard of President Ben Ali of Tunisia - or that he had ruled the country as a corrupt dictator for 23 years?
Tunisia stands at number 143 out of 179 countries when it comes to freedom of the press. It's a place, where, according to a 2008 Amnesty International report, human rights abuses by its security forces "continue unabated and are committed with impunity".
Yet if you've been living in the west, and getting your news from the mainstream media, you'll have been cheerfully oblivious to all the nasty, undemocratic things that were going on in the northernmost country in Africa, a country that many of us have visited for beach holidays in Hammamet and Jerba.

You can read the whole of the article here.
Posted by Neil Clark at 08:34

Go Tunisians, freedom from political abuse, silencing of your speech or your freedom to express, the freedom to elect your own leader. A leader that will NOT subdue you to years of abuse or nominate himself President For Life as his military police Humvee's roam your neighborhood looking for opposition and silencing their voices in the middle of the night.

I never heard of Tunisia on the news until now. It has been closed to Christian missionaries as long as I can remember, which I do consider rotten.

On the other hand, Tunisia rated 95th in economic freedom, and an infant mortality rate of 18/1000 suggests that while Ben Ali was a corrupt dictator, he's done a much better job at running his country than a lot of other corrupt dictators. He hasn't run his country into the ground like Robert Mugabe or the North Koreans.

try to be better informed.

Neil Clark's beloved Belarus ranks 154 on the Press Freedom Index I just looked up. I presume a long NC rant about that country's disgusting human rights records will follow in double-quick time.

You are quite correct Neil.

There many be exceptions to this rule but they are sufficiently few & far between thatthe media should be considered guilty until proven otherwise.

Seriously after seeing the dictator of Tunisia with the evil villian you know "America's finest Defense Secretary" Donald Heinrich Rumsfeld sends chils in us as well as anger. Regardless of whatever your comments are it doesn't matter because history is being made and democracy and freedom will come there soon. As for that evil murderer and terrorist Donald Rumsfeld, we all hope that he burns in hell!!!