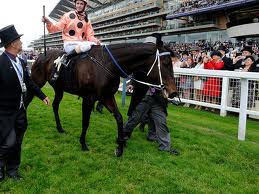 Another good day for the IP Guide yesterday with wins for Dramatist (5-2) and Dark Shift (13-2 from 11s), a place for Maria Branwell at 9s and each-way selection Tempus (40-1 in the morning) third in the Royal Hunt Cup. Here are my thoughts for Thursday. 2.30 David Loughnane came very close to winning this last year but looks to have a good chance of going one better with WALBANK. THE ANTARCTIC looks well drawn in 10 and could be the main danger, while PILLOW TALK, in receipt of a handy 3lbs fillies allowance, has a definite each-way claims for trainer Karl Burke, who landed the Queen Mary yesterday. 3.05 It's a big price (33-1), but given his record in the race (6 wins), Mark Johnston's sole representative ACHNAMARA has to go on the each-way shortlist for the King George V. Charlie Hills landed the Royal Hunt Cup yesterday and his runner iNVERNESS, who won his maiden on good-to-firm, is another to consider for a place at big odds. 3.40 It's a very open Ribblesdale but MAGICAL LAGOON bypassed the Oaks for this and rates the likeliest winner. 4.20 A win for STRADIVARIUS will bring the Ascot roof down, but will he do it? A three-times winner of the Gold Cup, the legendary stayer was only fourth in the race last year when he didn't get the best of runs. No eight-year old has won the Blue Riband event since 1900 so the stats are against him but against that he is a very special horse and you couldn't put it past him. KYPRIOS has an obvious favourite's chance if he stays the trip while PRINCESS ZOE, second last year, looks quite solid each-way. At very big odds (66-1) EARLOFTHEOTSWOLDS, who has good form at the track over jumps ,may be overpriced from an place perspective. 5.00 So many with chances but well-drawn CD winners ATRIUM and WANEES are the each-way suggestions. 5.35 The Queen may be watching at home but she looks likely to have a winner to cheer on as REACH FOR THE MOON should be hard to beat in the Hampton Court. Jane Chapple-Hyam's runners have been in good form this week and CLAYMORE could be next best. 6.10 Horses drawn high are likely to prove the solution to this 7f event; it was won by a horse drawn 31 last year, while yesterday the 7f finale saw 40-1 shot Rising Star (drawn 17) narrowly prevail over another 40-1 shot Random Harvest, in stall 22. DANCE FEVER is the widest drawn in 31, while in 30 we have SILENT FILM, a winner of his last three starts. OUZO is 27 is another to consider, he ran very well in the Royal Hunt Cup last year and jockey Saffie Osborne was onboard Random Harvest yesterday.
Posted by Neil Clark at 10:26