A Nazi Rocker in New York 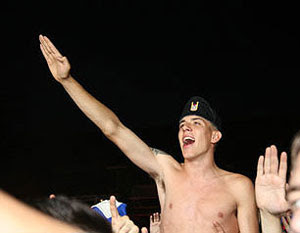 Here's something you won't be reading about on the self-proclaimed 'anti-fascist' website Harry's Place.

At $55 per ticket, Croatian popular rock singer Marko Perkovic, known as Thompson, is betting that New Yorkers will flock to the Croatian Center in Manhattan for a night of a Croatian nationalist euphoria that includes a sword-wielding singer, ballads about extermination of Serbs and Jews during the World War Two and massive Seig Heils by the fans (one pictured above).

"A singer who sings nostalgically about Ustasha leader Ante Pavelic and favorably about Croatia's worst World War II concentration camps Jasenovac and Stara Gradiska, is openly urging his fans to identify with the genocidal Ustasha regime which sought to liquidate Croatia's Serbs, Jews, and Gypsies as well as their Croatian political opponents," says a statement issued by the Wiesenthal Center in Israel.

I wonder what the neocons would say if an Iranian artist spouting similar racist and anti-semitic poison to Perkovic was booked to play in the US?
Posted by Neil Clark at 13:15

The neocons would probably call it freedom of speach and ignore it...

I don't think this story will be appearing on The Times 'Comment Central' either...

I believe Ceca Raznatovic is still banned, purely on the grounds of who her late husband was.

Yeah, well, I guess that every country coughs up a few ugly specimins every now and then (some of the Serbian turbo-folk mob of the '90s, for instance?)- and he's certainly one of them. But other than that, I really don't get your point.

Mistaking Serbian turbo-folk with Thomson's glorification of Nazism might have something to do with your not getting the point!