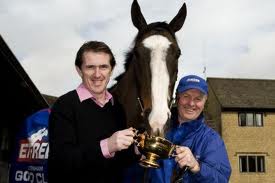 This piece of mine appears over at The Week/The First Post.

Neil Clark: The closest ever finish is overshadowed by deaths of two horses: now it's time to reduce the field


On the positive side, we saw the closest finish in the race's history, as 33-1 outsider Neptune Collonges pipped Sunnyhill Boy by a nostril in a photo-finish. Third was Seabass, ridden by Katie Walsh, who, came close to becoming the first woman rider ever to win the race.


But elsewhere on the Aintree track a very different story was being played out, as two fine horses, the Gold Cup winner Synchronised, and the gallant Northern handicapper According to Pete, were destroyed after injuries sustained following falls at Becher's Brook, the National's most dangerous fence.

UPDATE: You can hear me discussing Saturday’s Grand National and possible changes that could be made to make the race safer, on BBC Radio Wales, here.
The item starts at around 55 minutes and 40 seconds into the programme

Did you have any money on any of the top 3 finishers? I, of course, would be partial to Seabass.

Neil Clark said...
This comment has been removed by the author.
10:18 AM

I hope you backed Seabass! There was nothing 'fishy' about its performance!
I had a small each-way bet on the winner as I'd seen it run at Haydock in the Grand Nat trial and it ran really well then to stay on to finish second. The thing that put me off having a bigger bet, and why I gave Neptune C three and not four stars, was the weight: no horse has carried more than 11st5lbs to win since Red Rum in the 70s.
I also had an each-way bet on Cappa Bleu, who finished fourth.

Have you managed to watch the race yet online? Quite amazing finish.