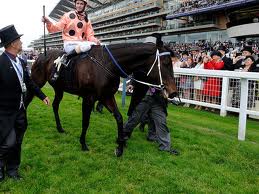 This piece of mine appears in The Spectator (Australia)


She came. She saw. She conquered. But blimey, it was close. Like 77,000 or so others I headed to Royal Ascot on Saturday to see ‘The Wonder from Down Under’ — to get my first glimpse of the horse officially rated the world’s fastest sprinter. I’d seen Black Caviar on YouTube and had read about her exploits at Flemington, Caulfield, Moonee Valley and other tracks across Australia. But now this equine superstar was 10,496 miles from home, in the cool and cloudy UK, to put her reputation and her unbeaten record on the line. Could she make it 22 wins from 22 races? Or were we about to witness the eclipse of an Australian sporting icon, a shock defeat on a par with Eric Hollies bowling Don Bradman out for a second ball duck in his final Test innings at The Oval?

You can read more of the article here.