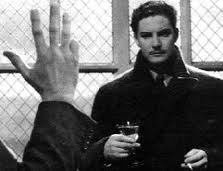 This column of mine appears in today's Morning Star.

The only thing the Tories and their millionaire friends are trying to ‘conserve’ is their wealth says Neil Clark.


In the classic 1935 Hitchcock film The Thirty-Nine Steps there is a memorable scene when the hero Richard Hannay tells a man who he thinks is an ally that the evil criminal he is after has part of a finger missing.

To Hannay's horror the man raises his hand and says: "Are you sure it's not this finger, Mr Hannay?"


In the same way that Hannay mistakenly took an enemy to be his ally, so too did the millions of Britons who voted Conservative in last year's national and local elections.


Up and down the country, people trooped off to put an X next to the name of the Conservative candidate in the belief that the party was on their side.


Sick of new Labour, many genuinely believed the PR spiel that Dave's Conservatives were no longer the "nasty party" and that they really cared about communities and "hard-working families."


They believed that Cameron, far from being a hard-core Thatcherite, was actually a nice, moderate "one-nation" Tory in the Harold Macmillan mould.


Now, though, they are waking up to a brutal truth - that as bad as the Labour government was, the Tories and their Lib Dem coalition allies are actually 10 times worse.


Up and down the country, uber-Thatcherite Tories are launching an assault on many of the things that traditional Conservative voters hold dear.


Royal Mail, in state hands since 1516, is to be privatised.


The NHS faces the biggest upheaval in its history, one which will pave the way for the takeover of hospitals and doctors' surgeries by multinational corporations.


Hundreds of public libraries face closure. Our publicly owned forests, including historic ones like Sherwood Forest, are to be sold.


The official name of Cameron's party is the "Conservative Party." But it should really be called the "Destructive Party."


The only thing Cameron and his multimillionaire chums want to "conserve" is their wealth and the rule of international finance capital. Everything else can be destroyed.


In December Tory MP Nicholas Boles, a close associate of Cameron, let the cat out of the bag when he said he wanted "big society" reforms to unleash "chaotic" effects in local communities.


The Destructive Party wants chaos - in our health service, in our schools and in our local communities - so that their vulture capitalist pals can then swoop and take over.


It's the same brand of "disaster capitalism" which Naomi Klein described in her book The Shock Doctrine.


Acknowledging the extremist nature of the coalition government ought to help shape the left's response. Writing in the Guardian, Peter Guillam said that the left needs to find common ground with "small-c" conservatives alarmed at the way things they cherish, such as local libraries, post offices and the NHS, are under assault.


Up and down the country people who would not ordinarily consider themselves to be on the left are joining campaigning groups to save local services.


Middle England is on the march, and they are marching side by side with trade unionists, health service workers, teachers and students.


More and more people are realising that the battle is not between the middle classes and the working class but between a tiny financial elite and everyone else.


This provides a great opportunity for the left to forge a powerful anti-neoliberal coalition to challenge - and defeat - the present government.


A GREAT SOCIALIST
This month marks the centenary of a great European socialist and supporter of public ownership Bruno Kreisky, chancellor of Austria from 1970-83.


The faux-left, which sadly has been so dominant in British politics in the last 20 years, tells us that socialist policies can't win elections.


Yet Kreisky's Socialist Party won three resounding election victories in Austria in the 1970s by doing exactly that.


In the early 1990s, after Kreisky's death, the Austrian Socialist Party changed its name to the Social Democratic Party of Austria.


Although the party never embraced neoliberalism as enthusiastically as new Labour, the change in name was significant.


Post-Kreisky, the party moved away from its pro-public ownership stance and started to support privatisation.


Today the party governs Austria in a coalition with the right-wing People's Party and in October passed a harsh austerity budget involving massive cuts in government spending - cuts which threaten the achievements of the Kreisky era in health and education.


Rather than get the banks and the wealthy to pay more, the supposedly "progressive" Social Democratic Party of Austria prefers to let ordinary Austrian citizens pay the price. How "Kaiser" Bruno must be turning in his grave.