Every cloud has a silver lining: Deutsche Bahn privatisation is cancelled 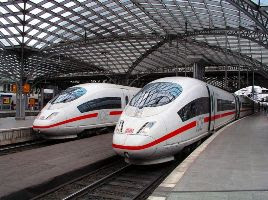 On Thursday, the partial privatization scheme for Deutsche Bahn by the German government was postponed and, according to German commentators, it is unlikely ever to get back on track. The privatization scheme was disrupted by the worldwide financial crisis. Deutsche Welle reports 'The German Government Postpones Deutsche Bahn Share Listing'. The German government has announced that it will postpone an initial listing of shares in the national railway Deutsche Bahn "for at least several weeks," a source close to the matter said on Thursday...
Turbulence on equity markets caused by the international financial crisis prompted the delay of the sale of a 24.9 percent stake, in what is set to be the last major privatisation in Europe's biggest economy.

The fact is, the already botched, partial privatization of the Deutsche Bahn received on Thursday ... it's death blow. And that's a good thing.

It most certainly is. As one of the Euro Tribune commenters writes:

"In my (often expressed) view, the privatisation of the German Railways is the longest-running, most crackpot and most dangerous project of neoliberals in Germany".

It beggars belief that the German government was even planning to copy the disastrous British example and privatise its excellent state-owned railway.

On the privatisation front, there's more good news from Serbia, where the planned privatisation of JAT has also fallen through. The airline is to stay in in public ownership.

The tide is turning, dear reader. Twenty-nine years of neoliberal dogma is coming to an end. It's public ownership- and not privatisation- which represents the future.
Posted by Neil Clark at 17:04

This is very good news.

I've yet to see an instance of privatisation that compares better to a democratic alternative.

What was wrong with the old nationalised industries was not public ownership, but a bureaucratic system of management that did not allow the participation of workers and consumers.

It is a fear of democracy that drives privatisation - a fear that workers and consumers will demand the extension of democracy into the economy.

Many thanks, Charlie.
I totally agree, the new models of public ownership must allow for the greater participation of workers and consumers.
We've had a massive shift away from democracy in the last thirty years- and privatisation has been a key element in this process.