When is the far right acceptable to the West? When it's in Ukraine 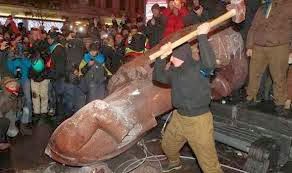 My new piece for RT.com OpEdge:

The ‘progressive’ Western political elites and the establishment journalists who act as PR agents for them would like us to think that they are unequivocally opposed to neo-Nazism, homophobia, racism and far-right political extremism.

But how genuine is their opposition? The current disturbances in Ukraine and the western response to them, suggests that it’s highly selective to say the least.

You can read the whole piece here:
Posted by Neil Clark at 19:18

Brilliant article. I'm at home reading of the US and EU double standars relating to Ukraine, totally frustrated. Such a relief to read your article.
Its worth also mentioning what little, if any, comments have been made about the police that have died as a result of the rioting, unlike the outcry when protesters died.

It is a shame that your posts on RT end up attracting such a barrage of anti-semitic and homophobic responses in suppport, especially considering the subject matter. Hey ho.

HandsOffSyria _4521 ‏@Hicks_4521 Feb 1
via #Eretz_Zen
After #Geneva2 #DrJaafari tells of how #SNC apologized to Syria for lies they themselves told.
http://www.youtube.com/watch?v=hJkKHsOcwjs

The term "racist" is over-used and is becoming increasingly vague in meaning. The same with "homophobic." The above article by Neil Clark, it seems to me, goes to far. Yes, the US & EU (who certainly have many attributes in common with fascists) are funding, advising, and controlling the Maidan revolution as much as they are able, as they have many others for decades. They are indeed attempting to install a financial-elite government in Kiev subservient to the corporate, banking, and Wall Street big capital 1% minority. But to label the Maidan protesters, or even the Ukrainian leaders of the protest, with extreme the extreme label of fascist or neo-Nazi, is too much. If there were evidence of this charge, it should be included in Mr. Clark's above article, and it is not. I may be wrong, but I have not seen evidence of fascism in my other readings about Maidan.

Mussolini said, "Fascism is the merger of the corporation and the state." The goal was end stage capitalism: super corporations and super banks that no longer compete, control the government, and do and charge whatever they want. A rigged table for obscene levels of super-profit. Marks wrote that capitalism would proceed to this end stage, unless stopped.

Mr. Clark's above article claims that the Maidan demonstrators and their Ukrainian protest leaders are fascists. True, there is an overabundance of evidence that the 1%-er controlled US and EU governments condone and support fascist governments (e.g. the Shah of Iran, Marcos in PI, etc etc), but these overtly corrupt regimes are out of fashion.

These days, Puppet regimes must have much slicker PR (public relations) images. Tony Blair and Angela Merkel are two recent examples of this sophistication.

The Maidan revolutionaries are dupes, pawns of the financial elite, but their intentions are good. They want to get rid of a corrupt autocratic leader, Yanukovich. They have been fully brainwashed with the western imperialist line that free trade + free immigration + big corp/bank loan financial development = Freedom. While other countries with more experience with that fraudulent equation either opted out of the EU from the beginning (Switzerland, Norway), or more numerously, have started to realize their folly in joining it. Concentration of power in far away Brussels inevitably led to the type of sophisticated and layer-hidden corruption that it is difficult for the average voter to fathom, and difficult to prove...
[Continued in next post]

...Yet it has come to the point that in the extreme areas of fraud, extortion, and grand theft, the EU fringe countries (Cyprus, Greece, Italy, Spain, Portugal, Ireland), people are beginning to realize that most of the massive loans from the EU never reached the people. Banking and accounting practices have become increasingly adroit, the people inured to cryptic terms like "loan portfolio," "derivative," "credit default swap," etc. Marches and demonstrations (receiving cursory coverage by the elite owned mainstream and internet press) march and demonstrate now against austerity in their countries. These are people outraged by the injustice of being forced to repay what they never borrowed, never received. They are not demanding that their credit card debt be forgiven, for they received the goods and services they put on their cards. But EU-enforced austerity is theft from the people. Austerity is destroying what remains of the people-oriented social programs which began after WWII.
Privatization and austerity are PR spin words for the insidious seizure by the financial elite of the government, institutions, and money of the people.

If there is any real danger that a fascist government could succeed Yanukovich, I will be looking for it in Neil Clark's and others' future articles. All those singing, candle vigiling, and Molotov Cocktail throwing Ukrainians would be extremely disappointed if such transpired.
_________________

The above Clark article lumps together the terms fascist, racist, and homophobic. Above I pointed out how the first term is overbroadly applied. The second two terms are also. "Racism" is now used, pundit fashion, to include opponents of immigration. "Homophobic" is now used to criticize those who oppose gay marriages, gay adoptions of children, and gay recruitment of minors.

Why is it that victims of occasional smear and hate speech so readily go too far in their own defence, smearing and hating their opposition? The advocation of the cessation or curtailment of immigration into one's own country, and the attempt to protect the institution of marriage, children, and minors from homosexual incursion, are justifiable positions, worthy of respect and consideration. They are not "hate crimes."

Nor are they "neo-Nazi fascism."